Spring in the Flilnt Hills

It is Spring 2011, and the Flint Hills of Kansas are ablaze as they have been for thousands of years. In the far distant past, the fires were begun by lightning. Today, ranchers who stock the hills with cattle for market burn the grass to remove weeds and to restore the nutrients. This annual rite of burning is celebrated each year by Kansas Flint Hills Adventures. It can also be observed by the traveler along Interstate 35 between Emporia and Wichita, but be careful as the smoke can make driving hazardous.

Kansas weather can be fickle - one day sunny and sixty, the next day a blizzard.  This is especially so in spring, when the cold Canadian fronts battle the warmer weather of the south. Kansas weather takes on the personality of Dr.Jekyll and Mr. Hyde and the result can be deceptively dangerous.

So it was 80 years ago, on March 31, 1931, when a single engine plane carrying Notre Dame football coach Knute Rockne and 7 other passengers crashed on a stormy and foggy day. The tragic event has been remebered annually by family members and again, eighty years to the date, family members, including those of Knute Rockne, gathered at the crash site near Bazaar, Kansas. This time it was a beautiful Spring day.

History of the Crash

The  AP wire service reported the crash and it became front page news across America. 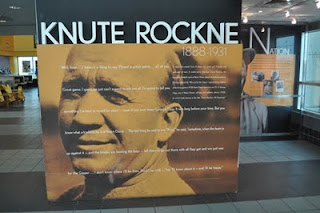 
KNUTE ROCKNE, famous football coach of Notre Dame university, and seven others were killed when a Trans-Continental and Western air passenger and mail plane crashed in flames today in a pasture several miles southwest of Bazaar, Kas.

ROCKNE boarded the plane here en route to California at 9:15 a. m. and about 11 a. m. the ship identified by its department of commerce license number, crashed and burned as it fought a fog and storm en route to Wichita, Kas.

GenDisasters, as posted by Stu Beitler. 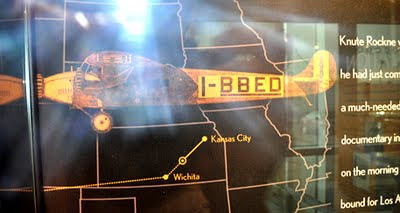 The plane, a Fokker Trimoter, went down when the wing separated from the plane. A young boy working in a field feeding cattle witnessed the tragedy. He heard a terrific explosion in the foggy sky. Looking up he saw an airplane burst into flames and rocket toward the earth.When he came to the crash site, he found that all were dead.

The traveler can view a memorial to Knute Rockne and the others who died at the Matfield Green service area at milepost 97 on the Kansas Turnpike, between Wichita and Emporia.

The memorial includes large photos of Rockne during his playing and coaching days, as well as some photos from his business ventures as a motivational speaker. Also shown are some of his well-known plays as a coach and speeches made to his players. Many of the images at Matfield Green are posted by Irish Musings. 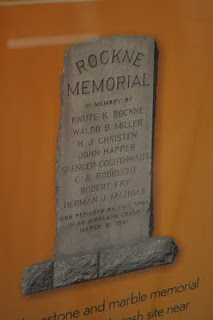 Tragic events touch all of us. The cause of the crash, the structural components of the wing, led to an investigation and improvements in existing and new planes. But there was also a personal side to the story.

I have traveled the Kansas Turnpike between Overland Park and Wichita for over 20 years. Often I will stop at the Matfield Green rest area and view the life-size image of Knute Rockne. But it was only when a long standing customer came into the store that I learned of the personal connection for our customer.

Chicago native, John Happer, a friend of Knute Rockne, happened to be on the same plane. Mr. Happer worked for Great Western Sporting Goods, now Wilson Sporting Goods. And he, like Knute, was on his way to California on business. In Knute's case, it was to help in the filming of the movie The Spirit of Notre Dame.

Posted by you are what you read at 7:24 AM No comments: 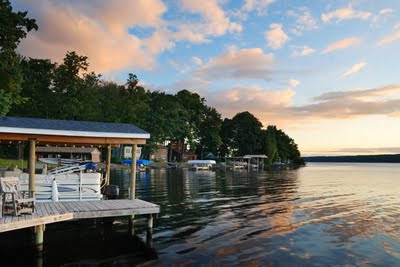 But when it does come, it arrives in all its majesty. An azure blue sky on which are painted pillowy clouds in shades of grey and white. The water of the 12 Finger Lakes, so named because of their long narrow shape, takes on the color of the sky. This all leaves one to wonder where heaven and earth separate.

One hundred and eleven years old and going strong, L. & J.G. Stickley continues to build some of America’s finest furniture. And the home of Stickley Furniture is Manlius, New York, located deep in the Finger Lakes region of Upstate New York. In such a beautiful setting, it is not unexpected that Stickley has been producing the finest furniture in America for one hundred and eleven years.

Since 1900, the Stickley philosophy has been "living in harmony with nature". And this philosophy is apparent from their commitment to using quartersawn oak, wild black cherry, and other natural woods, all of which are more abundant today than when Leopold Stickley started the company with his brothers in 1900. 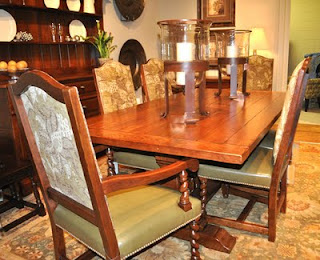 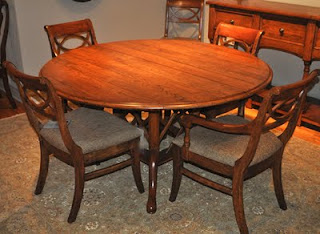 In a tribute to the serene beauty of the Finger Lakes, Stickley Furniture introduces the The Finger Lakes Collection. It joins Stickley Classics with a unique interpretation of  American Western design influences.


The 60” Geneva Dining Table has a grooved plank top with a molded edge which rests on a lattice-and-post base, creating a charming birdcage effect. Four cabriole legs with dramatic reversed curving incorporate carved volutes.

There is of course more. The 27 piece collection includes four dining rooms and several occasional pieces all crafted from cherry solids and veneers.

And you can see them this summer at Traditions Home in Overland Park and Wichita.
Posted by you are what you read at 8:39 AM No comments: 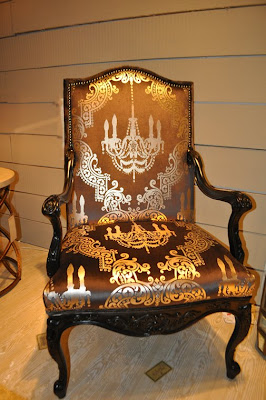 A chandelier is a decorative ceiling-mounted light fixture with two or more arms containing complex arrays of crystal prisms to illuminate a room with refracted light.


Fabric is about a lot of things: style, beauty, dare we say, fun, durability, and, of course, your individual taste. Even Liberace would love this unique chandelier fabric from Sherrill, which looks as lovely on a chair as it would mounted on the ceiling.

Sherrill has thousands of colors, weaves, and patterns from which you can choose. And, of course, each piece is painstakingly hand-tailored by skilled specialists.

Click here to discover the variety and beauty of Sherrill fabrics.
Posted by traditions furniture at 5:06 AM No comments: