Another season is ending

Another season is ending, we know because Labor Day is just around the corner.

One last vacation and a dip in the lake.

One last trip to Whitefish, Montana, then south towards Missoula, where fires still burn in the forest, (the locals say it always burns in August in Montana). Stop along Flathead Lake and watch fire suppressing helicopters load up with water to douse the flames.

Then stop at Bigfork, where in a quaint bookstore I find a used copy of Bright Orange for the Shroud, a Travis McGee novel by John D. MacDonald, and the store owner and I talk of pottery, which is his passion. Everyone has time to talk in Montana.

Then down the road to the Raven for brisk swim in the cool lake, a beer and lunch. The smiling guests are talkative, the beer cold, the food nourishing, and the swim in the lake exhilarating.

Where are you from? I asked.

Michigan, Pennsylvania, California, Texas, Georgia, even Paris, France came the replies. And scattered among the hundreds who came and stayed, are a lucky few born and raised in Montana.

Happyland, I renamed the state for everyone seems to smile.

Only a fool would leave.

Don't get me wrong. I love Kansas. It is a great place to raise a family, but mountains and cool blue lakes, it has not. So, I must travel and extol the virtues of Kansas elsewhere. Ad astra per astra. Hard work is okay, and hard work gets me to Montana where I like to play.

Now, imagine my pleasant surprise when coming back to find the Kansas weather in the 70s and 80's.

If I close my eyes, I imagine I am still in Montana sitting at the Raven beside Flathead Lake, near Bigfork. A smile comes to my face.

May Sale on Stickley

It is already May in the Midwest, the tulips and daffodils have gone, the wheat and corn is in the fields, and it's time for our Last chance to buy Stickley at 2016 prices. Our great pricing makes this a wonderful opportunity to freshen up the bungalow, craftsman home, or whatever style house you have.


There is a fertile piece of land in America that stretches from the Appalachian Mountains west to the Rockies, which eastern dwelling city folk find strange because it is both simple and natural.

Traveling across this green and fruited plain and dressed in suits and finery, these city folk must have wondered who could leave behind the wonders of the industrial age for this wasteland. But to the God-fearing and hard-working Americans who lived here, this was their paradise.

One took delight in the rising and setting of the sun. The milkman delivered fresh milk. The egg man newly laid eggs. And a corner grocery store stocked necessary sundries. Screen doors banged throughout the day as children came and went, headed out to an empty lot to play baseball, or coming home to cookies and milk, and backyard fences were gathering places for good neighbors to talk while the laundry was hung to dry.

A Midwesterner by birth, Gustav Stickley settled in upstate New York, deep within the forest of the Allegheny Mountains at the western edge of the Appalachias, in a region called the Fingerlakes. There eons ago, glaciers left their mark carving out the beautiful lakes that give the area its name. And there, Gustav Stickley found his inspiration in nature, establishing the American Arts and Crafts Movement and creating the Prairie Style that would become better known as Mission Style, perhaps because of its association with California. In his magazine, Stickley preferred the use of Prairie Style and Craftsman Home, but he acknowledged the influence of the California Missions because of their simplicity in style and decoration. 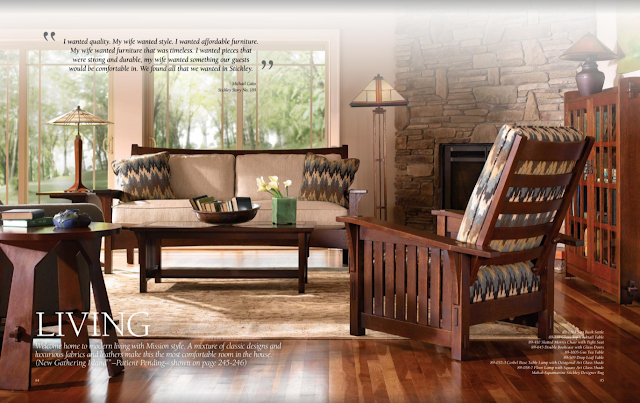 Like Henry Ford and his Model T, Stickley new Prairie Style was meant for working-class families and those who loved the simplicity of well-made homes and furniture. The home that Stickley designed and featured in The Craftsman Magazine was called the bungalow, or more aptly, the American Bungalow. It was inexpensive to build, practical to live in, and easy to maintain. And because this was the age before television, there was always a front porch where at the end of the day, neighbors exchange the news of the day. 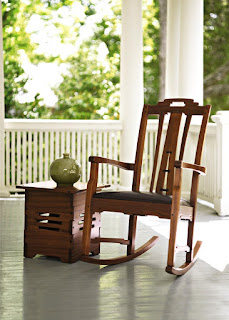 The popularity of the Prairie Style was immediate. Plans could be found in Stickley’s magazine and even entire homes could be purchased from a Sears catalog; and Craftsman homes cropped up like wheat from the suburbs of Chicago to California, where in Pasadena, the Greene and Greene brothers gave the style their own unique twist.

The furniture that Gustav Stickley designed for these homes was both “simple and honest”. This was a term Gustav Stickley interpreted to mean that it was made of natural native woods like oak and cherry, that the construction was always handmade, using time honored techniques. Stickley’s classic designs include the Prairie Settle and Prairie Bed. Borrowing a design from noted English designer William Morris, Stickley redesigned and improved the Stickley Morris chair in several variations including the beautiful bow arm reclining chair. 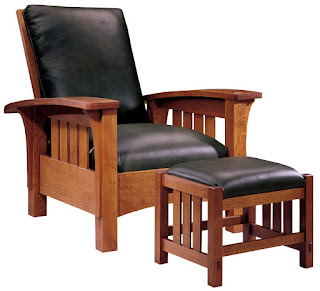 In 1904, Stickley was joined by architect Harvey Ellis, who added an element of refinement to the furniture, graceful arches, and delicate inlays. You can see the full line of Prairie Style furniture at Traditions Furniture in Overland Park and in Wichita, Kansas.

Posted by you are what you read at 7:02 AM No comments: