How amazing is FLW? How can you incorporate the look of Frank Lloyd Wright in your home? Read on...

Why the continued fascination with Wright almost 50 years after his death?

Architect/interior designer Constance Ramos (http://www.constanceramos.com) thinks his style endures because of its contemporary, organic lines. "My dad, also an architect, was a great Frank Lloyd Wright fan and that rubbed off on me," she says. "Wright was really searching and finding the design of American democracy. And he had these amazing people who followed him and still carry out his work and philosophy. So Wright is still everywhere, and he's still relevant."

Wright was arguably one of the most multi-talented people of the 20th century, according to interior designer Mark McCauley, ASID. "Not only did he help create and define the Prairie School style — open floor plans, horizontal lines, a nod to nature — that is still popular today, he also designed everything from furniture and textiles to lighting and accessories," says the author of Interior Design for idiots (http://businesswebsites101.com/idiots).


Wright was born in Wisconsin and worked for decades in Chicago, but his buildings are elsewhere like Hollywood (private homes), Tokyo (The Imperial Hotel) and New York City (The Guggenheim Museum). His work in Kansas City includes  Clarence Sondern Home, 1940, the  Russell and Ruth Kraus House, 1946 - 1951, and the the Frank Bott House Kansas City 1956. 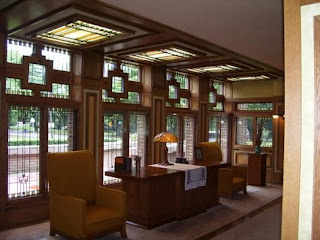 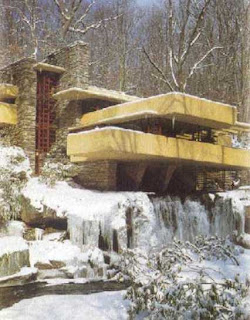 Traditions Furniture offers Stickley Furniture, a line that goes perfectly with the style of Frank Lloyd Wright's.
Clean lines and pureness of function make the Stickley Mission Collection truly timeless, and the look is as appropriate in today's homes as it was over a century ago when Gustav Stickley and his brothers began the American Arts and Crafts Movement. Possessing a distinguished pedigree yet uniquely modern, Mission furniture makes itself at home in every room of the house, telling the world that you appreciate sophisticated comfort and solid craftsmanship.

Posted by Harmonious Posh at 12:51 PM