Once upon a time in a fairy-tale forest, three bears lived together in a tree-house - a Wee, little bear, a Middle-sized bear, and a Large, huge bear.

For brown forest bears, the three bears were very good-natured, even the Large, huge bear; and they got along quite nicely with the other animals in the forest, even the porcupine, who at times could be quite prickly.

I know that you heard that these bears were a family - they weren't. They were just bear friends who got along together, hardly ever arguing. Still, each bear was set in their own way, preferring their food just so, their dress just one way or the other. Each bear had their own Stressless chair in just the right size - small, medium, and large. Size mattered for each bear liked to stretch out, read a favorite book, eat cookies and drink hot cocoa before taking a nap. And no chair is as comfortable as a Stressless recliner. That, they all agree on.

The tree-house was quite a large affair. The tree itself was the largest oak tree in the forest, so large that the three bears with their arms outstretched together could not reach around the trunk.

In the middle of the trunk was a door with a window.  Inside the door, a circular stairway took one up above where long branches extended way out over the forest floor. On the largest branch was a porch, where the three bears could watch all that went on in the forest. It was on the porch that the three bears kept the Stressless recliners in sizes large, medium and small.

One day the three bears decide to take a walk in the woods while their cocoa cools. The Large bear dresses in a bowler hat and bow-tie,  the Middle-sized one takes a walking stick of burled oak, and the Wee bear wears a green and yellow scarf decorated with butterflies. The three bears set off without a care in the world.

A little girl with golden locks wanders away from home. As her home was in the valley near the forest, it was not unusual that she should stray into the forest where the birds and other animals dwelt. By chance she discovers the bears' dwelling. She looks through the window, peeps through the keyhole, and lifts the latch to the door. Finding no one home, she walks in.

The little girl with the golden locks admires the bears' tidy house immensely. Finding one of the Middle bear's walking sticks she waves it about and breaks it. She tries to drink the Large bear's cocoa, but it is too hot. She then sits in the Wee bear's Stressless recliner and exclaims, "It's just right!" 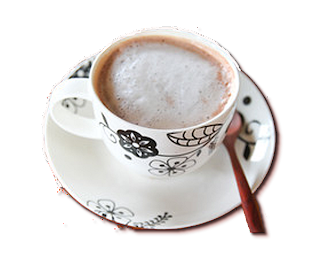 Soon enough, as you might guess, the three bears came home. When the Wee bear sees the little girl in his chair with the empty cup on the floor, it lets out a low growl.  The little girl opens her eyes, sees the three bears rising menacingly on their hind feet, jumps up and off the porch, and runs away, never to be seen again.

And as for the three bears, they laugh heartily. Then, as they were weary from their walk, they each make a cup of hot cocoa and go back to their Stressless recliners and take a long nap. As the chair was so relaxing, they didn't really miss the cookies.
Posted by you are what you read at 6:41 AM No comments: