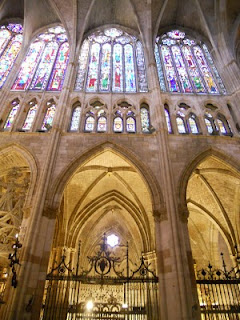 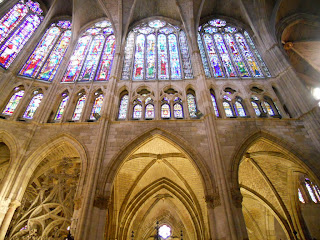 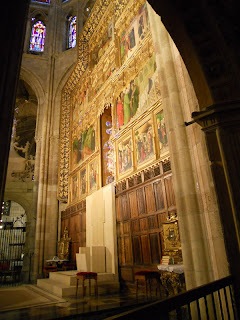 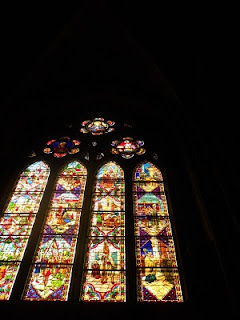 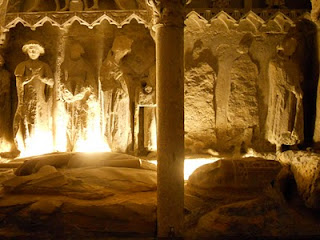 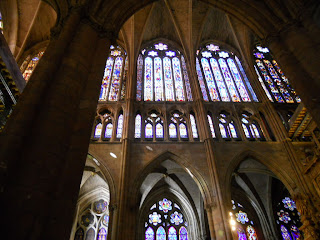 Since my last article, Ozzie has traveled to the end of the world. Well, not literally, but figuratively. Figuratively because the Spanish have chosen to name this rock Finistere, which means End of Land. One can imagine Christopher Columbus in 1492 sailing away to an unknown world and wondering if the trip was one way.

Ozzie and his friend are staying in the small fishing village of Portosin on Spain's western coast. The road along the coast winds up and down through the hills that provide a bulwark against the Atlantic storms that rage in the winter. Fortunately, it is summer. The sky is blue and the air is clean with a scent of fish and salt. In Portosin, each and everyday, excepting weekends and holidays, in Portosin, the fishermen bring in their catch from the sea. They work on boats that are perhaps 30 to 40 feet in length with crews of five or six. The catch is often anchovies. It is a fish perhaps five or six inches in length. The anchovies are quickly put on ice and loaded onto trucks for the market. These salty fish make a great dinner or snack.

Ozzie prefers the quiet of the villages to the bustling action of the cities. In Portosin, one can walk along the beaches and watch the seagulls pick among the debris left on the sand for their morning meal. Occasionally, one meets a Spaniard out for a walk, but it is not often. Here the water is cold and the currents dangerous.

Two days of relaxing in Portosin and Ozzie is on the road again. This time headed back to Santiago de Compostela, then east along the Camino Santiago, or Way of St. James. This is an historically significant route that since the Middle Ages has been a pilgrimage for the devoted. Pilgrims would walk from all over Europe to pay homage to the shrine of St. James in Santiago de Compostela's cathedral. During the Middle Ages, it is estimated that a half million devoted Christians made the journey each year. The number today is not quite as high, but it is still remarkable in this day and age to see the young and old walking along the old route. 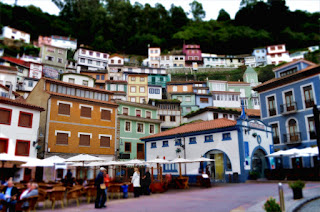 Next, our journey took us to the northern Atlantic and along the coast to Luarca. For awhile, we strayed from the highway to join the dvout on sideways on their journey to Santiago. This was the first time that I have heard English spoken, when chance brought us together with two ladies from South Africa. Their husbands stayed home; they were making the jaunt together, a trip they said covered 20 to 26 kilometers a day.

From the seaport of Luarca in Cantabria, we travelled to the province of Astruria. Ozzie drove up into the Picos de Europa and onto the town of Covadunga. Here in 722, Pelagius (Pelayo) defeated an army of Moors and kept a Christian kingdom in northern Spain from which the Reconquista would eventually be launched. The drive through these mountains is spectacular, all the more so as they rise steeply only a few miles from the coast line. The steep hillsides have, like Switzerland, small farms where cattle and sheep graze on the hillsides.

Asturia, is that where John Jacob Astor gets his name from?

Sometimes, I have internet, sometimes I don't. Traveling on the road is not always conducive to good writing habits.

We leave Pots and Pans behind for a trip across the top of the Picos de Europa.The route takes up to Riano through winding roads and deep valleys. Ranchers let their cattle feed on the hill side grass giving the impression of Switzerland. Finally, I understand what the triangular road sign is with the cow means. A Spaniard, his wife and dog are driving the cattle down the mountain road.

There is little traffic to mar the view, but the trip is slow. After 30 minutes, the beauty is worn thin by the need to pay attention to the cutbacks on the road.

A night in Leon - the cathedral is spectacular. Its stain glass windows rival those of Chartres. Stayed at the Hotel Eurostar, near the El Cortes Ingles.

A short drive to Benavente is about all we can take after the harrowing drive through the mountains. The drive is only 90 kilometers so we arrive early and take a break. Staying at the Hostal Universal, just off the main square. For that reason, as we will discover later that night, the party goers keep up their revelry til midnight and the trucks roll by at all hours of the night.

The city is quintessentially Spanish to me. By that I mean that the shops shut tight from 2 until 4 in the afternoon, dinner is not served until 8, and Spaniards come out in the evening to walk about. Ozzie wonders when is prime time tv in Spain?

A trip to Zamora is worth it just for the visit to the cathedral of Zamora. There one finds one of Europe's greatest collections of tapestries. My camera is full of pictures from the tapestries alone. The cathedral itself has a beautiful tiled dome. The interior is rich in art work and paintings.

By the end of the day, Ozzie finds himself in Tordesillas. It is a hot dusty town, a way station on the path to larger cities. Staying at the Hostel El Pardo.

Thursday
Posted by you are what you read at 8:21 AM 1 comment:

Labels: Finisterre, Galatia, Spain, The End of the World

Just a note to remind myself where I have been for the last week. Starting off in Toledo, it was west to Caceres and Merida. From Merida, it was into Portugal, staying first at Coimbra, site of one of Portugal's most important univerisites. Then, on to Aveiro for a little "R & R" on the beach. Aveiro is a pretty town with canals that the Portuguese liken to Venice. The canals are not as extensive as Venice's, but they are a nice centerpiece to the ancient downtown. Aveiro also hosts many beautiful churches, including the Catedral Se and Miseriacordia. The Miseriacordia especially uses tiles in both its exterior and interior decorations.

By Wednesday, we were ready to drive north through Porto and onto Braga, a religious center for all of Portugal. The Portuguese say that they play in Lisabon, work in Porto, and pray in Braga. The disrepair of many of the buildings in Braga suggests to me that the Bragans should pray a little less and work a little mor. Still, a visit to the Dom do Jesu with its beautiful view of Braga from the top of a hillside and the stariway that leads up to the church is inspiring.

Eventually, we stayed the night in Guimaraes, birthplace to the nation of Portugal. The massive castle inside the city is where, in the 12th century, Porutgal's first king, Alfonso Henriques rose to power. Again, there are many beautiful churches to view and a historic city center to wander.

Next it is onto Santiago in Spain's remote northern province of Galatia.
Posted by you are what you read at 1:40 AM No comments:

Put a Cork in It 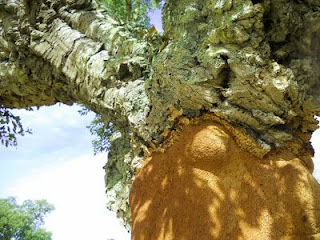 1. Half of all corks used come from Portugal - some 70 million corks a day.
2. Dom Perignon, the champagne making monk, started the trend of using the odorless cork as a stopper in the 17th century.
3. Cork is peeled off an oak tree, called Quercus suber.
4. After it has been stripped from the tree, cork takes ten years to grow back.
5. The tree grows naturally in the wild, but is cultivated in large tracts on rugged hillsides.


The cork is environmentally friendly. Trees planted are carbon neutral, labor employed keeps the Portuguese happy, and then, there is nothing like pulling a cork and hearing the pop.

Can't put the cork back in the bottle? Solution - drink the entire bottle.

1. Speak Spanish - hablas Espanol. The Spanish do, so should you. 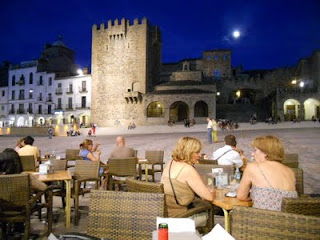 2. Stay out late - after 8 is when the tourists go to bed and the Spaniards come out.
3. Try the menu del dia. For 10 euros each, we had a three course meal with a full bottle of wine. Try doing  that at Yia Yias.
4. Look for out of the way places. You will be surprised to find quaint but beautiful cities everywhere in Spain. Sure, the big cities are famous, but the small cities have their own flavor - like the flavors of a gelato store.
5. Get out of the car and walk, or better yet, go for a run.

Posted by you are what you read at 2:37 AM No comments:

Toledo is capital of the province of Castille-La Mancha. It is a short 45 minute drive from the airport at Madrid and along the route one sees the outline of a large steel bull, symbol of the province. With a little effort, one can also find the windmills that Don Quixote famously tilted at. 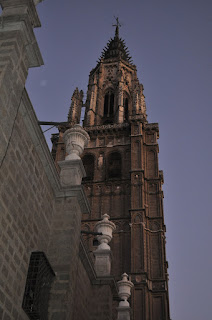 The city of Toledo is a World Heritage site, a must stop for any visitor to Spain. A short list of things to see and do must include the narrow winding streets of the city, its many cathedrals and churches which are home to paintings by el Greco, the Alcazar, and the view of the River Tagus. Just as engaging are the visits to the local shops which specialize in anything steel, which is what Toledo was famous for. While swords and steel suits are not necessarily the primary means of defense today, they still adorn many homes.

Since my last trip to Toledo, I had forgotten the sweet flavor of Marzapan, which is a specialty of the many pastry shops. But by far the favorite pastime of the hard working citizens of Toledo is to sit in a local cafe and sip a beer or a glass of the local wine.

Plan to stay in the city and be a part of the night life. You can drive, but remember the streets are tortuously narrow, but exciting. Be careful and retract your rear view mirrors or risk a scrape. Park in a garage and pay the 15 euros a day. Bring a Garmin to find your way or plan to get lost a lot.

My choice of hotels is the Hotel Eurico, a stones throw from the main cathedral in the city center. It is also convienient to the church of St. Tome, home of el Greco's famous painting, the Burial of Count Orgaz. The hotel is small and I consider this a plus as the service is friendly. The decor is a blend of the medieval and the modern. The rooms are cool, a must after a day in the hot Castillian sun. The beds are short, but firm and comfortable.

The city can be walked in a day, but you really need to stay for two or three to experience it all. And remember that the social life in Spain does not begin until after eight.

Posted by you are what you read at 3:08 AM No comments: