Summertime, which means it is time to travel, get away, relax, and reflect on the good times in life. Here is a Traditions travel story from a trip taken two years ago in Spain on the Camino de Santiago.

The route from the French-Spanish border to Santiago in the province of Galicia in northwest Spain was designated the first European Cultural itinerary by the Council of Europe in 1987. This route was taken by pilgrims since the time of Charlemagne - and still is - to the Cathedral of Santiago de Compostela.

The tradition begins with the Jesus' apostle St. James, who preached the Gospel in Spain, and dates from the 7th century. St. Jerome held that apostles were buried where they preached, so it was assumed that the body of St. James was moved from Jerusalem, where according to Acts of the Apostles he was martyred on the order of Herod Agrippa. Not until the 9th century was the apostle's tomb identified as being at Compostela.

The 8th century saw the consolidation of the Christian kingdoms of Galicia and Asturias in northern Spain and St. James was adopted as the patron saint by the small Christian kingdom struggling against the mighty Moorish kingdom of Cordoba. By the 10th century, pilgrims were coming from Tours, Limoges, and Le Puy in France to Santiago to honor St. James. The present Cathedral de Santiago de Compostela was begun in 1075. It was consecrated in 1128 before King Alfonso IX of Leon.

In 1139 the first "guidebook" to the holy route was published as Book V of the Calixtine Codex, attributed to Pope Calixtus II but likely the work of the pilgrim Ayrneric Picaud, described a route from Roncesvalles to Santiago de Compostela, listing the inns and taverns along the way. Thousands of pilgrims and tourist still walk or bike the camino each year, hoping to arrive by July 25th, the holy day for St. James.

A statue of a weary traveler greets you before you climb the stairs to the cathedral. 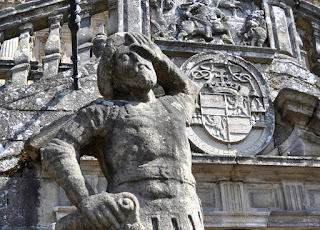 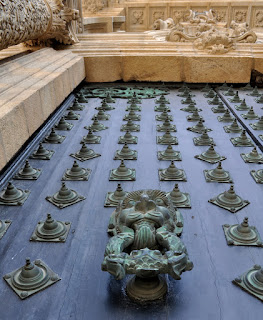 A seated St. James is there to welcome you when you enter. 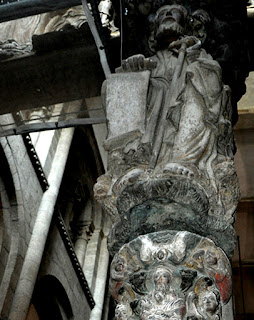 The Gothic style nave is barrel-vaulted, consisting of eleven bays. The transept, which crosses the nave and creates the impression of a cross from above, consists of six bays. 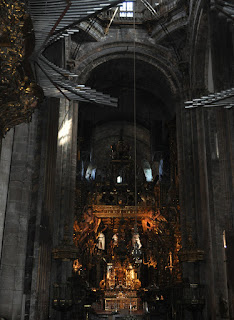 Now imagine what you would want to do if you just completed the Camino de Santiago de Compostela - rest, pray, and relax! 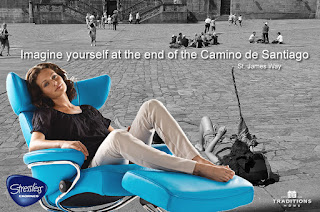